In late January, I joined Khan Academy as the third member of the infrastructure team. We were just starting a big performance push, so I spent my first week or two improving our profiling tools and finding and fixing some easy slow spots (including speeding up the home page by over a second). However, every time I profiled any page, I found that the A/B testing framework, GAE/Bingo, was always one of the slowest pieces. I had some ideas on how to make some incremental improvements to speed it up, but instead, I was given a much more ambitious project: to rethink and rewrite the whole A/B testing system from scratch. I had plenty of sources of guidance and advice, but I, the new guy, was to be the sole owner and author of the new system. I was up for the task, but it was nevertheless a bit daunting.

Instead of the old strategy of keeping the A/B test data continuously up-to-date using memcache (and periodically flushing to the App Engine datastore), the new system would report events by simply logging them, and those log statements would eventually make their way into Google BigQuery through an hourly MapReduce job based on log2bq. From there, the real A/B test processing would be done completely in SQL using BigQuery queries. Since we were revamping GAE/Bingo using BigQuery, there was an obvious name: BigBingo.

Of course, that three-sentence description leaves out pretty much all of the details and makes some dangerous assumptions, but the high-level plan ended up working (with some tweaks), and I’m happy to say that all A/B tests at Khan Academy are now running under BigBingo, and the last remnants of the old GAE/Bingo system are finally being removed. In this post, I’ll talk about why a rewrite was so important, how we think about A/B testing, and some specific points of the design and architecture of BigBingo. There are some additional cool details that are probably deserving of their own blog post, so look out for those in the future.

Most developers at Khan Academy had a sense that the old GAE/Bingo system was slow and BigBingo would improve overall performance, but I doubt anybody expected that the improvement would be as dramatic as it was. When I finally flipped the switch to turn off GAE/Bingo, the average latency across all requests went from a little over 300ms to a little under 200ms. The most important pages had even better results, but I’ll let the pictures do the talking:

The logged-in homepage got twice as fast: 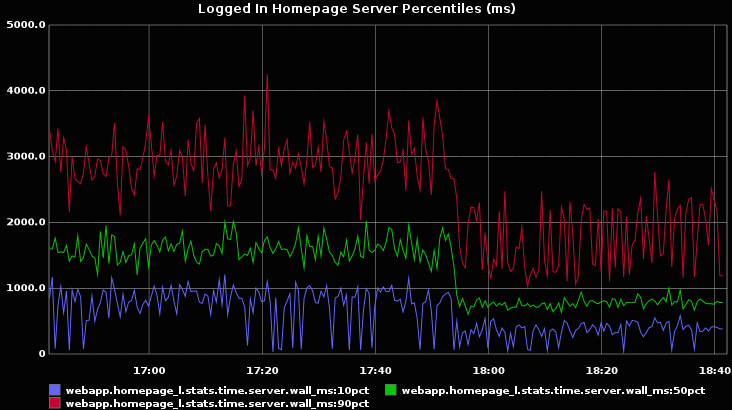 The logged-out homepage improved even more: 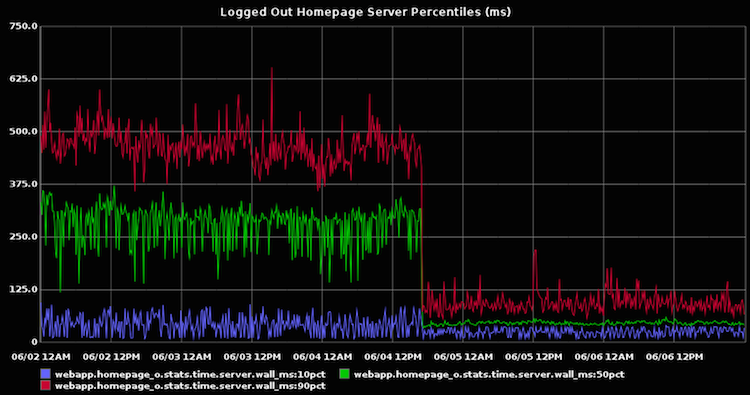 And our memcache went from “worryingly overloaded” to “doing great”:

Of course, making the site faster makes users happier, but it has another big benefit: cost savings. If requests can be processed twice as fast, we only need half as many App Engine instances running at a given time, so our App Engine bill drops significantly. Since Khan Academy is a nonprofit running off of donations, it’s important to us to have an efficient infrastructure so we can focus our money on improving education, not upkeep.

A/B testing isn’t just some occasional tool at Khan Academy; it’s an important part of our engineering culture, and almost any change that we care about goes through an A/B test first, often multiple A/B tests. Right now, there are 57 A/B tests actively running, which is an average of about two active A/B tests per developer.

Unlike “traditional” A/B testing (which tends to maximize simple metrics like ad clicks, purchases, etc.), Khan Academy’s A/B testing tries to maximize student learning. That means that we try out much more advanced changes than just little UI tweaks, and measuring success is a huge challenge by itself. Here are some examples of A/B tests we do:

In the years since GAE/Bingo was written, the devs at KA learned a thing or two about the right way to do A/B testing and what an A/B testing framework should really do, so BigBingo diverges from GAE/Bingo in a few important ways.

Here’s what you’d see when looking at the latest results of an old GAE/Bingo experiment (I added a red box to indicate the “real” data; everything else is derived from those numbers):

For clear-cut results, a few numbers will do just fine, but what do you do when the results are unexpected or completely nonsensical? In GAE/Bingo, the best thing you could do was shrug and speculate about what happened. BigBingo is different: we keep around all raw results (user-specific conversion totals) as well as the source logs and the intermediate data used to determine those results. Since it’s all in BigQuery, investigating anomalies is just a matter of doing some digging using SQL.

Here’s a big-picture overview of what BigBingo looks like: 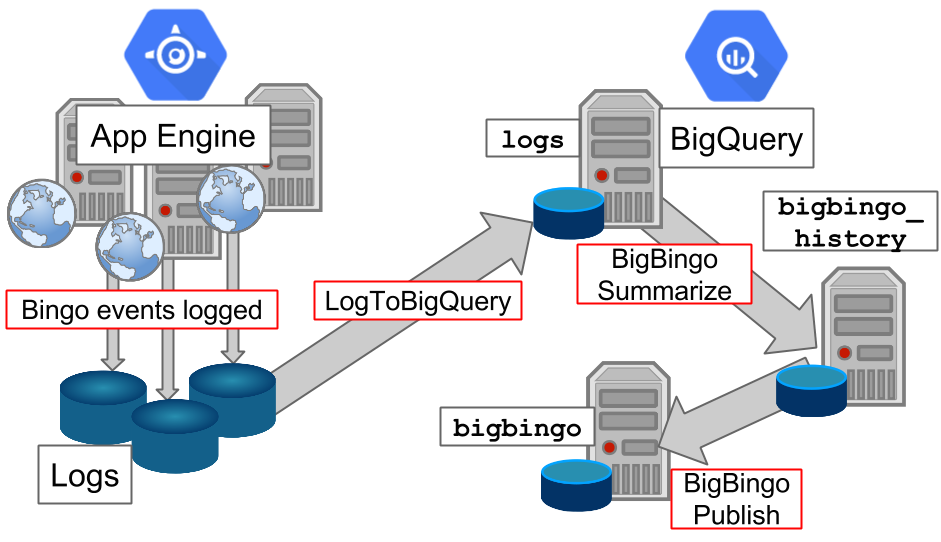 Here’s how the data flows from a user-facing request to BigQuery, then to the dashboard UI:

Most of the details are reasonably straightforward, but I’ll dig into what’s probably the most controversial aspect of this architecture: the decision to use Google BigQuery for all storage and processing.

If you’re not familiar with BigQuery, it’s a hosted Google service (really an externalization of an internal Google service called Dremel) that allows you to import giant datasets and run nearly-arbitrary SQL queries on them. BigQuery is way faster than MapReduce-based SQL engines like Hive: you’re borrowing thousands of machines from Google for just the duration of your query, and all work is done in-memory, so queries tend to finish in just a few seconds. The primary use case for BigQuery is for human users to manually dig into data, but I’ll show how it can also be used to build stateful data pipelines.

BigQuery supports nearly all SQL, but don’t let that fool you into thinking it’s anything close to a relational database! It has a small set of primitives that’s different from anything I’ve worked with before:

There are a few more operations that are less common, but the ones I listed are the most common ones.

Notice anything missing? No transactions? Not even a way to update or delete rows? No way to pull out a single row without paying for the whole table? How can you possibly keep track of A/B test results in such a restricted system? You’re pretty much stuck with the following rule:

To update a table, you must completely rebuild it from scratch with the new values.

It certainly feels like an architectural sin to rebuild all of your data over and over, but it’s not as unreasonable as you might think. BigQuery is quite cost-efficient (some rough numbers suggest that it’s more than 10x as cost-efficient as MapReduce running on App Engine), and there are lots of little tricks you can do to reduce the size of your tables. By designing the table schemas with space-efficiency in mind, I was able to reduce BigBingo’s data usage from 1TB ($5 per query) to 50GB (25 cents per query). (I’ll go over the details in a future blog post.)

There are also some huge usability advantages to using BigQuery over another batch processing system like MapReduce:

At first, having to deal with only immutable tables felt like an annoying restriction that I just had to live with, but as soon as I started thinking about making the system robust, immutability was a huge benefit. When thinking through the details, I discovered some important lessons:

This is probably best explained by looking at a simple data pipeline similar to BigBingo. First, I’ll give a straightforward but fragile approach, then show how it can be improved to take advantage of BigQuery’s architecture.

Goal: Keep track of the median number of problems solved, problems attempted, and hints taken across all users.

Every hour, the following queries are done to update the latest_medians table:

Step 1: Extract the events from the logs table into a table called new_event_totals:

Step 3: Find the median of each metric, and write the result to a table called latest_medians:

This code ends up working, but it doesn’t handle failure very well:

To solve all of these problems, just include a timestamp in each table’s name. The background job then takes as a parameter the particular hour to process, rather than trying to figure out what the “latest” hour is. Here’s what it would do if you run it with the hour from 6:00 to 7:00 on July 1:

The job takes the hour to process as a parameter, and reads the previous hour’s tables to generate that hour’s tables. Making three new tables per hour may seem wasteful, but it’s actually just as easy and cheap as the previous scheme. The main problem is that the tables will just accumulate over time, so you’ll rack up storage costs. Fortunately, BigQuery makes it easy to give an expiration time to tables, so you can set them to be automatically deleted after a week (or however long you want to keep them).

The core BigBingo job has 7 queries/tables instead of 3, but it is designed with the same strategy of keeping all old tables, and this strategy has helped tremendously and kept BigBingo’s data consistent in the face of all sorts of errors:

The system is completely foolproof: I could replace cron with a thousand monkeys repeatedly triggering BigBingo jobs with random UNIX timestamps, and the system would still eventually make progress and remain completely consistent (although it would be a little less cost-efficient). That level of safety means I can stop worrying about maintenance and focus on more important things.

Ideally, BigBingo would be a self-contained open-source library, but it currently has enough dependencies on internal KA infrastructure that it’s both hard to make general and would be a bit difficult to use in isolation anyway.

That said, there’s no reason I can’t share the code, so here’s a Gist with pretty much all of the code (at the time of this blog post). I put an MIT license on it, so feel free to base work off of it or use any of the self-contained pieces.

Khan Academy has lots of open-source projects, and it’s not out of the question for BigBingo to be made truly open source in the future, so let me know in the comments if you think you would use it.

That’s all for now

Curious about any more details? Think we’re doing A/B testing all wrong? Let me know in the comments!